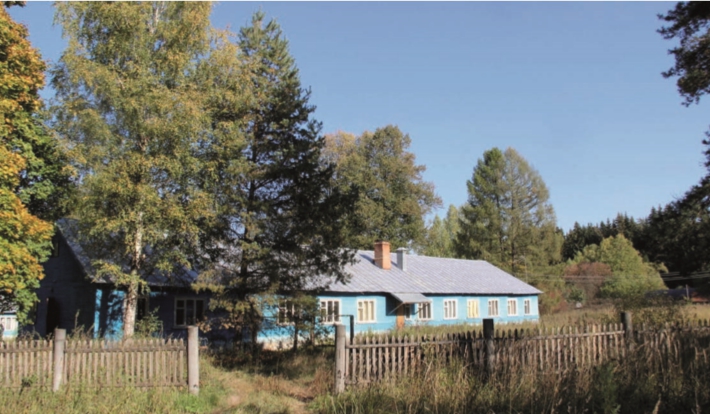 Biogeocenological station "Malinki" was organized in 1963 for carrying out field studies of the laboratory of biogeocenology of the Biological Institute of the USSR Academy of Sciences. On July 28, 1977, the biological station became part of the IEE RAS (then the A.N. Severtsov Institute of Evolutionary Ecology and Animal Morphology of the USSR Academy of Sciences).

The station is located on the border of the Podolsk and Narofominsk districts of the Moscow region (55 ° 27'N, 37 ° 13'E) 40 km from Moscow (10 km from the village of Krasnaya Pakhra). The station owns 3.6 hectares of land, which houses a laboratory and a residential building with an area of 400 m2 each. 2500 hectares of the territory are approximately 80% forests, 20% - fields, meadows, clearings and wastelands. The forests around the biological station consist mainly of 50-130-year-old pine and spruce forests with inclusion of birch and aspen, birch and aspen forests, secondary oak and linden forests. Environmental work began here in 1963 under the leadership of Academician V.N.Sukachev and the economic activity was reduced. Tamed black alder forests led to the creation in 1985 on an area of 14 hectares of the state natural monument of regional significance "Black alder forest".

The forests around the biological station are interesting because they were renewed about 100 years ago. The peasants received local forests on lease on the condition that they would plant a young tree of the same species in place of each felled tree. As a base for the study of such forests, the outstanding scientist-forester Academician V.N. Sukachev chose forest areas not far from the villages of Dybino and Polyana. A student and follower of V.N. Sukachev, professor V.N. Dylis headed and carried out work on the creation of an experimental base, called "Malinki" after the name of the timber industry, the lands of which share borders with the biological station. The name also stuck because there are a lot of raspberries (Russian - malina) in the vicinity of the biological station. The stress in the name was placed on the same syllable as in the namesake.

At the end of the 80s of the last century, several new environmental laboratories began to conduct their research on the basis of the station, as well as employees of university departments - Moscow State University (MSU), Moscow State Pedagogical University (MPGU), Peoples' Friendship University of Russia (RUDN) and others.

Following the traditions of academician V.N. Sukachev, the staff of the IEE RAS continue to study the problems of biogeocenology. Under the leadership of the long-term head of the biological station N.V. Dylis the vertical and horizontal structures of the phytocenosis were investigated at the station.

On the territory of the biological station, work is carried out on 50 permanent testing sites for long-term monitoring belonging to the subzone of broad-leaved-spruce forests and meadow phytocenoses. On the basis of these studies, recommendations were developed for the forestry of the Moscow region, the organization of forest park zones in Moscow. The results of fundamental research carried out at the Malinki biological station were used to substantiate nature conservation programs, including the creation of a network of biosphere reserves, the “Chronicle of Nature”.

Scientists from IEE RAS, Moscow State University, Moscow State Pedagogical University and other universities study invertebrates living in soils, as well as in terrestrial ecosystems. Particular attention is paid to monitoring the changes in the animal population under the influence of anthropogenic factors. Adaptations of animals in the soil habitat, taxonomic composition and structure of the population are under observation. Attention is paid to the tendencies of direct and inverse relationships between the composition of the animal population of the soil and the nature of the soil-forming process first noted by academician M.S. Gilyarov. Methods of zoological soil reclamation to increase its productivity are being studied on this site as well.

An inventory of the biodiversity of soil fauna and population is being carried out. The issues of the formation of biosocial structures in economically important ant species are investigated, taking into account their behavior under conditions of mass reproduction of harmful insects and other invertebrates. Methods of utilizing ants as a means of protecting forests from pests are being developed.

In 1964 under ed. of N.V. Dylis the complex Program of biogeocenological studies of forest ecosystems, which included a section on soil zoology, was compiled by M.S. Gilyarov and published. Subsequently, soil-zoological work at the Malinki station was carried out in accordance with the main provisions of this Program. The Malinki station, located in the central part of the Central Russian Upland, can serve as a regional center for organizing monitoring studies of the state of biotic components of forest ecosystems, including plant, animal and microbial communities typical for the zone of coniferous-deciduous forests of Central Russia.

Scientifically interesting species of invertebrates are found on the territory of the biological station (Fig. 1, 2, 3).

Bird watching in "Malinki" has been carried out since the 60s of the last century. In total, about 140 bird species have been recorded here. Regionally rare species listed in the Red Book of the Moscow Region nest here: harrier, house owl, green and three-toed woodpeckers, nutcracker, hawk warbler, warbler nesting is expected. Of the rare species for the near Moscow region, the black kite, the common nightjar, and the miser's thrush nest (Zubakin, 2002, Konstantinov et al., 1998, Sharikov, 2006). The area around the biological station is one of the key bird areas of local importance for the Moscow region.

The bird world is richly represented by many species, including those rare for the Moscow region. The common inhabitants of the station are great spotted woodpeckers, much less often green and gray-headed woodpeckers. In the Moscow region, both species are quite rare. The black woodpecker has been sighted as well. And closer to the Zhiletovka river, you can see another rarity - the white-backed woodpecker. An even greater rarity is a black stork hovering over the forest. Not every year, but often in the forests of the biological station, spotted nutcrackers can be found. Buzzards and goshaws are common in the vicinity of the biological station; they are found along with smaller predators - hobbyists and sparrowhawks. Dense thickets of bird-cherry on the edge and along Zhiletovka serve as a habitat for nightingales and lentils. Bird-cherry berries attract grosbeaks. Under the roots, near the water, a wren makes a nest. Pikas, chicks, nuthatches and great tits often fly to the edges and thickets of bushes. In late winter and spring bullfinches and common redpolls appear.

The white wagtail is a common inhabitant of the biological station (Fig. 4). Barn swallows nest in the laboratory and residential buildings. The colony of city swallows, unable to withstand the close proximity of people, left its usual nesting place. Gray flycatchers now often inhabit their nests (Fig. 5).

Animals living in the forests of the biological station are less noticeable than birds. Among them are moose and wild boars. Foxes and hares are more common. In spring and early summer, hares are frequent guests at the biological station (Fig. 9). There are also ermines and weasels that prey on numerous mouse-like rodents. Among the latter are several species of mice and voles, the number of which varies greatly from year to year, sometimes accompanied by significant epizootics. On the duckweed of the Dylisovsky pond, you can see traces of the muskrat stay, and if you're lucky, the animal itself, resembling a wet cat in the water.

Among insectivorous mammals, hedgehogs (Fig. 10), moles and shrews are common on the territory of the station.

MUSEUM OF NATURE OF CENTRAL RUSSIA

Under the auspices of the biological station, the Museum of Nature of Central Russia (MNCR) was created. It includes a collection of stuffed birds and mammals, mushrooms, bird nests, botanical collections dating back to the 60s of the last century, osteological collections and much more (Fig. 14).

The Museum appeared in February 2005 and not just from scratch, but from a disadvantageous spot. It was nothing more than a large, extremely cluttered room. The closets were full of 40-year-old chemical reagents, and chemical utensils were scattered everywhere, both usable and broken. The rotting floor finally caved. Such is the legacy of the past. In a twenty-degree cold in an unheated room, two employees of the biological station and one volunteer, headed by the future director of the museum, were cleaning these Augean stables. The room was completely renovated in a very short time. The IEE RAS Directorate assisted with money for tools and materials.

The collection of stuffed animals was donated to the Museum by the President of the Bashkir Ornithological Society, Ph.D. V.A. Valuev; all exhibits are made by him and his son. They took all this wealth from Ufa in that very frosty winter, needing several trips because of the overload. The last section of the path through the forest required a tractor to cross. We also equipped the expositions ourselves. In early spring, the materials were brought on a tractor, the project of the expositions was developed by the donor of the collection of stuffed animals, he, together with the worker of the biological station, assembled everything. With the first warmth, we began to create the interior surroundings of the expositions, using exclusively natural materials. Photos of biotopes were taken right there in the vicinity of the biological station, enlarging the images as a background for biological groups.

The task of the museum is to familiarize visitors with the unique flora and fauna of the Malinsky forest and other forests near Moscow, as well as with the work of the employees of the Academy of Sciences and university teachers at the biological station. Students also participate in these works as university practice. Particularly valuable specimens are displayed in the form of photographic images, allowing these species to be preserved intact.

The Malinsky forest is under active anthropogenic impact. Trees are cut down by poachers, the cover is trampled by mushroom pickers, pickers of berries, flowers and medicinal herbs. All of these factors damage the ecosystem and change its appearance. We must keep the legacy we have from further destruction. Increasingly large areas of meadows, fields and forest edges are captured by giant hogweed, displacing other plants and thereby negatively affecting biodiversity. In spring 2007, at the Malinki biological station, experimental studies of the invasive Sosnovskiy hogweed were started in order to prevent its spread and preserve biodiversity.

Neighboring builders are especially dangerous, creating new cottage complexes around the station. Their inhabitants regularly visit the Malinsky forest, leaving behind undesirable traces. In addition, these territories are often the object of hunting safaris, both for animals and birds. Urgent measures are required to preserve the Malinsky biocomplex, otherwise the change in the ecosystem may become irreversible.

In order to preserve natural ecosystems and their components, as well as experimental grounds laid almost 40 years ago, and to ensure the continuity of observations, IEE RAS has made repeated attempts to organize a state nature reserve on the territory of the Black Alder Forest nature monument. The conservation regime will make it possible to continue studying the dynamics of natural ecosystems and their components, as well as expand biogeocenological research and monitoring of biodiversity in the natural zone under conditions of increasing anthropogenic pressures near the metropolis - Moscow.