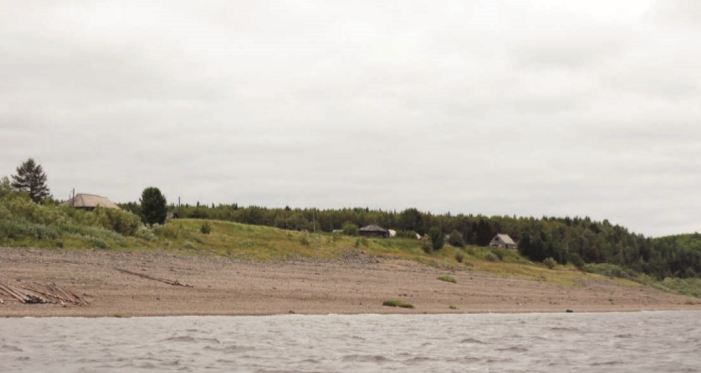 The station consists of: 2 laboratory buildings, a canteen, a hostel, a bathhouse, a warehouse. Transport to the station is mainly carried out on water (to Lesosibirsk, Krasnoyarsk). The station is capable of hosting up to 15–20 employees and students at a time.

The station was organized on the initiative of the academician of the Russian Academy of Agricultural Sciences E.E. Syroechkovsky in 1969 on the territory of the practically abandoned village of Mirnoye in the Turukhansk district of the Krasnoyarsk Territory. Since 1980, the station has been owned by IEE RAS. The station is located on the bank of the river Yenisei along the widest part of the current and is surrounded by middle taiga dark coniferous forests of Siberian cedar, spruce, pine and larch. The Yenisei Valley presents a complicated complex of dark coniferous taiga, shrub (willow) communities and several types of meadows. The station is located within the biosphere range of the Central Siberian Biosphere Reserve.

The founders and organizers of the station set themselves the task of studying the zonal features of the nature of Central Siberia on the Yenisei meridional transect. Therefore, despite the fact that the main task of the station was to study taiga ecosystems, it served as a support base for broader studies and generalizations concerning not only taiga territories, but also tundra and arctic landscapes, including Taimyr to the north, as well as the south of Yenisei Siberia - up to the steppes and semi-deserts of Khakassia and Tyva. From a wide range of areas of scientific work of the station, the following can be distinguished.

1. Study of biological diversity on the Yenisei meridional transect. Comprehensive long-term monitoring. The main research was carried out in the faunistic and floristic plans, as well as in the biogeographic aspect. Special attention was paid to the study of the phenomenon of the Yenisei biogeographic boundary, which is the most important meridional biogeographic boundary of the Palaearctic. Special attention was paid to the study of rare animal species and bird migrations in the Central Palaearctic migration region. One of the main theoretical directions of soil botanical research is the development of a methodology for the integrated monitoring of disturbed ecosystems. The purpose of such monitoring studies is to assess the timing, possibilities and prospects for the restoration of disturbed communities as integral natural systems.

3. Protection of ecosystems and scientific foundations of nature reserve management. It is obvious that expeditionary work is not enough for a deep study of ecosystems and the development of scientific foundations for their protection. It requires long-term stationary research, which can be carried out on the basis of reserves and biological stations. Thus, the idea of organizing a meridional Yenisei system of protected areas was formed. Over the next decades, this idea has been consistently implemented. If in 1956 there was only one reserve on the Yenisei - "Stolby", then by 2000 a fairly representative system of 10 reserves, two biological stations and a number of state reserves was formed, reflecting the zonal natural and biological diversity: from the Arctic deserts in the north to dry steppes and semi-deserts in the south of the transect.

4. Population and ecological research. Perhaps this is the most traditional direction for biological stations. During all the years of its existence, ornithological work was carried out in Mirny: studying the landscape structure of the bird population, studying the spatial and temporal dynamics of the bird population in the Yenisei floodplain, studying the interannual population dynamics, feeding behavior and ecomorphology of closely related bird species, monitoring the structure and dynamics of bird distribution. The second object of work in this direction is small mammals. As a result of a long-term study of the movements of the number of small mammals, a clear 4-year cycle of population dynamics was revealed. At the same time, the decisive factor that allows the Micromammalia population to have such a clear cycle of numbers, are the natural conditions of the Yenisei Central Siberia, a stable and high snow cover, which shelters the animals in winter from adverse external influences.

5. Ethno-ecological research. The Yenisei transect is also of great ethno-ecological interest. The northern regions of the Krasnoyarsk Territory and the two autonomous districts (Taimyr and Evenki), in addition to the Russian population, are home to 8 indigenous peoples of the North: Kets, Selkups, Evenks, Yakuts, Enets, Nenets, Dolgans, Nganasans. Particular attention is paid to the Kets living in the area of the station. The ethno-ecological aspects of the traditional nature use of the Kets are being studied - the study of individual ethnic groups of this people (Yeloguy Kets, Sulomay Kets, Kurei Kets). Recommendations have been developed to rationalize traditional nature management, contributing to the survival of the Ket people as a whole, including the creation of a special type of ethno-ecological specially protected territories. This type of specially protected areas is enshrined in Russian legislation (Federal Law on Protected Areas, 1995). In 1987, in the basin of the Eloguy River, the first in Russia ecological and ethnographic reserve "Eloguisky" was created. Another aspect of the work is solving the problems of survival of small peoples on the territories of biosphere reserves. These issues were discovered on the example of the test site of the Central Siberian Biosphere Reserve, and work is in progress to resolve them.